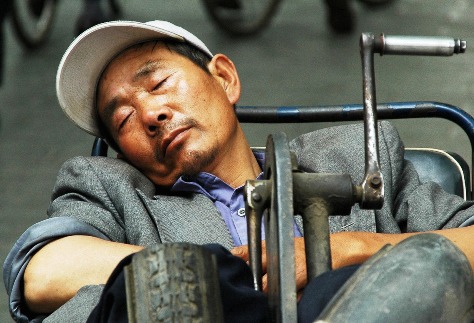 Obstructive Sleep Apnea (OSA) is a common condition. It occurs during sleep, when the soft tissues around the throat relaxes. This causes the back of the tongue to fall backwards and block the airway, thus preventing breathing. Very often this is accompanied by loud snoring.

When the airway is obstructed, one’s blood arterial oxygen level drops. This causes the brain to wake up, to tell us to “do something”, i.e., breathe! We wake up, breathe normally, then, as we fall asleep again, the soft tissues around the throat relaxes, causing obstruction to breathing, our arterial oxygen level drops again, and we wake up again. Usually, this awakening is very brief and we do not usually remember this.

These repeated episodes of airway obstruction and awakening occurs throughout the entire sleeping process, five to more than thirty times an hour, all night long, and prevents one from attaining deep restorative sleep. Hence a person who has obstructive sleep apnea is chronically sleep deprived. This may in turn cause excessive daytime sleepiness, morning headache, difficulty concentrating during the day, mood changes, irritability, depression, high blood pressure, night time sweating, as well as decreased libido.

You should consult a medical doctor if:
You can be more prone to suffering obstructive sleep apnea if you:
Seriousness of OSA:
Obstructive Sleep Apnea is a serious medical condition because it causes chronic sleep deprivation. Therefore the patient with OSA suffers from severe daytime fatigue and sleepiness, since the repeated awakenings due to OSA make normal, restorative sleep impossible. This causes severe daytime drowsiness, difficulty concentrating, tendency to fall asleep at work, while watching TV, and while driving, thereby causing an increase in the risk of being involved in a car accident. Additionally, children, and young people with OSA may do poorly at school, and commonly have behavioural, or attention problems.

OSA causes a sudden drop in blood oxygen levels, which cause an increase in blood pressure, which imposes a strain to the cardiovascular system, which in turn increases the risk of heart disease. The more severe the OSA, the greater the risk of coronary artery disease, heart attack, heart failure, and stroke. It also increases the risk of abnormal heart rhythms. Altogether, these repeated episodes of low blood oxygen could lead to sudden cardiac death.

Certain medications, such as sedatives, narcotic analgesics, and general anesthetics relax the upper airway and may worsen one’s obstructive sleep apnea. Hence, if you have OSA, you might have worsened breathing problems after major surgery, after being sedated, and when lying on your back. Hence, if you have OSA, and need to undergo surgery, it is important to tell your doctor that you have OSA symptoms before surgery is done.

There have lately been other findings: Research has found a connection between OSA and some eye conditions, such as glaucoma. Such eye complications can usually be treated.

The loud snoring from OSA can keep your partner from getting a good rest and be sleep deprived as well. This could also disrupt your relationship.

Other symptoms related to OSA include problems with memory, mood swings or feelings of depression, as well as a need to urinate frequently at night. Hence OSA needs to be diagnosed early.

Treatment
Treatment includes using a device that keeps your airway open during sleep. Another option is by using a mouthpiece that would thrust your jaw forward during sleep. In more severe cases, surgery may be contemplated.