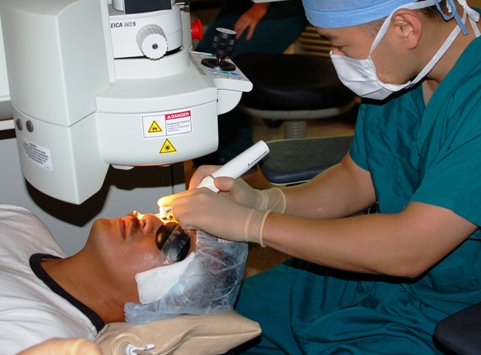 Diabetic retinopathy (DR) is a serious microvascular complication of the retina associated with both type 1 and 2 diabetes, and is the leading cause of preventable blindness among people of working age in developed countries. Although rates of blindness have fallen, the rapidly increasing number of Canadians with diabetes is leading to a continued rise in burden of DR.

DR is categorized into non-proliferative diabetic retinopathy (NPDR), and proliferative diabetic retinopathy (PDR), where NPDR is divided further into mild, moderate and severe stages. Signs of NPDR include micro-aneurysms, cotton wool spots, and hemorrhages. As the disease progresses to its proliferative stage as a result of retina ischemia, increased capillary permeability and new vessel growth are triggered. PDR is also further classified into non-high-risk PDR and high-risk PDR. Specifically, high-risk PDR is a late-stage form of DR characterized by new vessels on the optic disk or vitreous hemorrhage. If untreated, 50% of patients with retinal new vessels are blind within 5 years.

Normal Anatomy and Physiology:
Eyes are sophisticated visual instruments that mediate the special sense of sight, and understanding the relevant anatomy provides an essential platform for discussion of the pathophysiology behind high-risk PDR. The eyeball contains three layers of concentric tunics in its wall: outer fibrous, middle vascular and inner neural layers.

The neural tunic, known as the retina, comprises various cells organized in layers. The retina consists of a pigmented part and a neural part. The pigmented layer has a thin-pigmented epithelium, which lies adjacent to the choroid and absorbs light, passing it through neural part. The neural retina receives its blood supply and nutrients from two sources. The outer third containing the photoreceptors are supplied by capillaries in the choroid. The inner two-thirds is served by the central artery and central vein of the retina. The optic disc is an area on posterior pole of the retina and it is also the entry point for central artery and veins, and the site of abnormal neovascularization.

Angiogenesis or neovascularization of the retina, a process of the formation of new capillary networks from pre-existing vessels in the retina, is a hallmark of PDR that is closely associated with loss of vision. The role of vascular endothelial growth factor A (VEGF-A), in the progress of retinal disease, is currently recognized as a major mediator of intraocular neovascularization. Worsening microaneurysm and venous occlusion in NPDR leads to areas of retinal ischemia and progression to PDR. The retina responds to this ischemia via pathologic overexpression of VEGF-A. This leads to the activation of various transcription factors which initiate expression of genes involved in endothelial cell proliferation, migration, tubular structure formation, and disorganization of blood vessels. The outer third containing the photoreceptors supplied by choroid capillaries are affected as the new vessels form scar tissue on the retina that contracts and pulls on the concomitant connective tissues, and deforms the retina. This leads to the mechanical separation between the pigmented and neural layers known as retinal detachment. This allows the vitreous humour to seep between them, resulting in the deprivation of nutrient supply to the photoreceptors and irreversible vision loss.

Treatment:
In patients with established high-risk PDR, panretinal laser photocoagulation has been the gold standard treatment as it reduces retinal ischemia-driven VEGF production and induces regression of neovascularization. The aim of PRLP has been to improve retinal oxygenation using thermic destruction to ischemic retinal areas with a laser. As photoreceptors use more oxygen than most cells in the body, destroying them is an effective way to reduce the oxygen consumption of the retina, decrease hypoxic load and restore normal VEGF levels; the typical pan-retinal photocoagulation pattern of about 1,200–1,500 burns may reduce the oxygen consumption of the outer retina by approximately 20%.Consequently, the decreased retinal ischemia leads to reduction in synthesis of VEGF, and neovascularization suppression, and it is shown that 57% to 77% of eyes treated for high-risk PDR with PRLP manifested regression of neovascularization within 6 month. Additionally, it is important to reduce development of DR in the first place via timely tight control of blood glucose, early monitoring and detection and regular eye check-ups.

The Canadian Health Awareness Society is a registered non-profit organization. Our Mission is to promote health awareness on health issues for all Canadians by education, support and advocacy. Website: healthleader.ca.